"Astonishment for the Great Buddha of Todai-jiTemple; admiration for the statue of Asura.
On to Horyu-ji, Toshodai-ji and Yakushi-ji. This is the core of Nara sightseeing.

However, in 1998, when Gangoji registered as one of the cultural assets of ancient Nara under the World’s Cultural Heritage program, a buffer zone around the temple became Naramachi, a new Nara destination.
Very few know that much of Naramachi was inside the Gangoji temple grounds. We’ll quickly introduce the evolution from the ancient Gangoji temple to the formation of Naramachi. 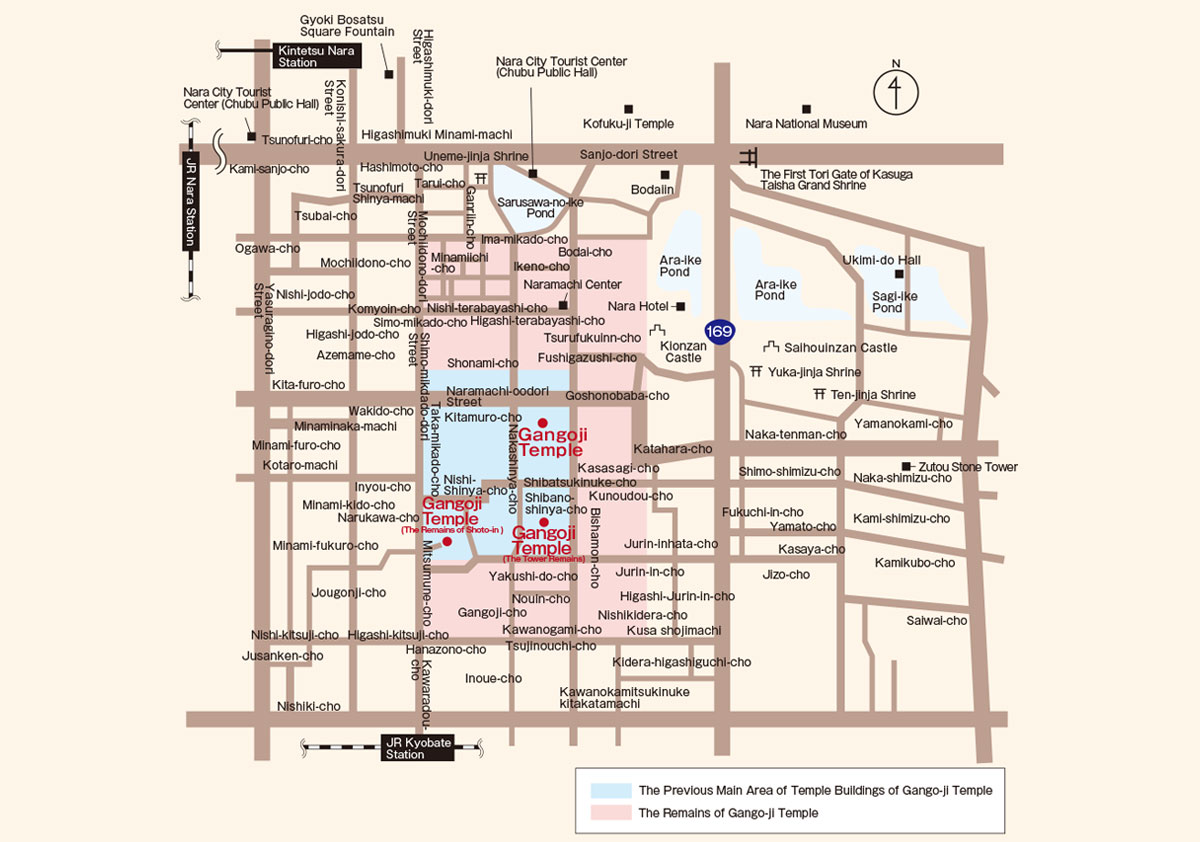 It is presumed that the temple buildings were allocated on the ancient Gangoji grounds as shown on this figure. Unfortunately, we know very little about the remains of the buildings at Gangoji. You can see a glimpse of the former huge temple from the Zen Room building. You can also see the tower base remains and some antiques and cornerstones left in a few places, and the big temple has been buried under Naramachi, the details lost to history.
In 1035, during the Heian Era, the “Dosha Sonshoku Kenroku Cho” reported that the ceilings in the Golden hall and the auditorium were falling apart and rain was leaking in. Roofing tiles in the corridor were falling off, part of the building where the priests live had crumbled away, exposing a big tree. By the Heian Era, there was no financial relief from the country and many ancient temples were disappearing. Gangoji was no exception, faring poorly during this time. But this is not when Gangoji became Naramachi. Of course, buildings disappeared in the early period north of the dining room, south of the Great South Gate and west of the priests’ living quarters, but the central part of Gangoji continued to exist. Gokuraku-bo hall went through reconstruction in the Kamakura Era, and priests lived in and maintained Shoto-in and the inner gate hall, gathering all sorts of faiths.
A big transition occurred in 1451. In October of that year, a revolt demanding debt cancellation had the people surged into Gangoji from Yamato region, and settled houses on fire. This was the Hotoku Era Riot. A strong wind kicked up, unfortunately, and Gangoji’s Golden hall and Shoto-in were burned to the ground. In the past, that would have been the end of Gangoji, but then around the south Main Gate, Sarugaku entertainments were held in this area, and Gangoji’s temples somehow found a way to be maintained. Perhaps this is the beginning of Naramachi.

"In the beginning of the Edo Era, Kodo Murai walked all over Nara and researched its history for his book “Narabomoku-sekkai”. According to his book, he described a town called “Shinya” with central Shinya and West Shinya that were mostly formed in 1573 to 1592 on the temple grounds of Gangoji. It seems that a town had formed around Gangoji grounds near the end of the Sengoku Era. This was proven through the research results of an excavation. The important remains of Gangoji’s old temple grounds are protected, and every year there is a lot of excavation research done on the grounds. The research has unearthed a lot of wells, holes for pillars and trash areas in the remnants of the old buildings, but building remains before the 1550s are extremely rare. The signs of life after 1550, including wells and holes for pillars, have been found. The removal of the cornerstones of Gangoji buildings determined the promotion of the construction of townhouses. Traces of the cornerstones for Gangoji’s auditorium, belfry and golden hall were uncovered after they had fallen into a hole and were buried. This was an act that altered the understanding of ancient Gangoji and symbolized the completion of Naramachi. This occurred in the early 1600s. From the second half of the Sengoku Era, the central area around Gangoji grew into a town, and in the Edo Era, the town developed quickly into a city. At the core, this was because Oda and the Toyotomi government occupied Nara, and the old government that had supported Gangoji was taken away. The forming of the Edo Shognate finalized this situation.
When one reads the history, one begins to see that Naramachi, where the old townscape is preserved, was actually a very new town within Nara."

Set in the land of beginnings with a history spanning 1,300 years,
Gangoji is a National Treasure and World Heritage Site of Nara.